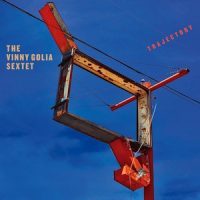 “Juxtaposing composition with dynamic improvisation, Golia’s music engages the mind and the heart, and radiates an enigmatic spirit that has inspired generations of musicians.” – 9rpm, 18 Mar 2018

“this is a work of precious, exceptional power…a riveting double-disc album with enough bite to attract free and avant-garde jazz fans as well as enthusiasts of an audacious crossing between modern creative and groovy funk.” – Filipe Freitas, Jazz Trail (11 June 2018)

“The multi-reedist Vinny Golia has been an anchor and catalyst of the experimental scene in Los Angeles for some 40 years…There’s a fine, snarling exuberance in this track, whose title is a characteristic burst of punkish, Golian humor.”  – Nate Chinen, WBGO (2 Apr. 2018)

“The two discs and sixteen tracks are the musical equivalent of Jonathan Swift’s Brobdingnag, land of giants…Multi-reedist Vinny Golia has always been about giantism and he is a multi-instrumentalist, having mastered multiple saxophones, clarinets, flutes, bassoon, taragato, English horn, strich, and numerous percussion instruments… Packed between the arrangements, the electricity of guitar and bass, and some muscular drum-work are some mesmerizing solos…” – Mark Corroto, All About Jazz (3 May 2018) 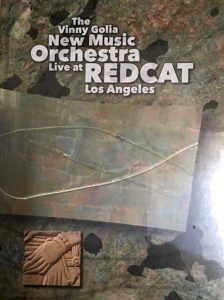 “This DVD is a masterwork in so many ways…well-captured both sonically and visually, an immensely tight rhythm team holding everything together and kicking the large ensemble into high gear.  Mr. Golia blasts an incredible bari sax solo, sounding like John Surman in his early days, tearing it up, raising the roof higher & higher…” – Bruce Lee Gallanter, Downtown Music Gallery 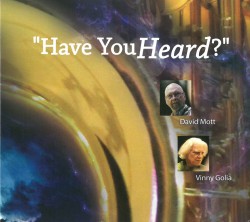 “There is something ancient sounding going on here, like spirits form the distant past hypnotically evoking better times in the present or future…The two saxes build to a grand, intense conclusion, turning into one solid force.”  – Downtown Music Gallery (13 July 2018)

“From the suggestive disc title Have You Heard? and the ethereal mystery of each track name to the questing music itself, this disc seems to contain echoes of another universe… It is in the dark and delicious rumble of two baritone saxophones locked in an interminable melodic double helix – often with magical counterpoint.” – Raul da Gama, The Whole Note (01 Mar 2018) 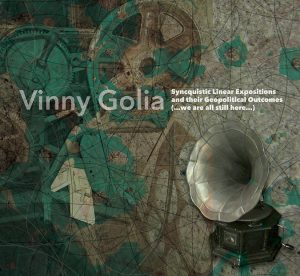 “…there is not a slow or predictable moment throughout this memorable set…Golia, who long ago developed his own sound on nearly every possible reed instrument, is featured on sopranino, soprano, baritone, bass clarinet, kwala (an Arabic flute), kayzee and gongs.” – Scott Yanow, La Jazz Scene (Jun 2018)

“This grouping, with the greats Vinny Golia and bassist Bert Turetzky, emphasizes the players’ fleetness and facility with a chamber-like setting.” – freejazzblog (14 Jun 2018) 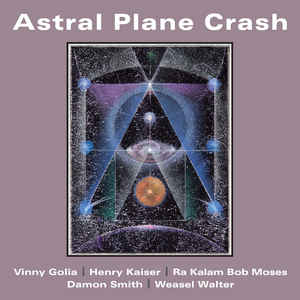 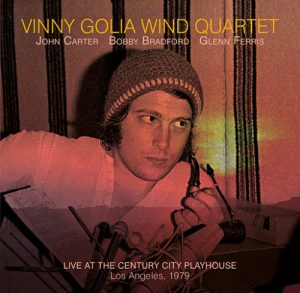 “This [rerelease] was one of the earlier albums in the lengthy and impressive career of multi-reedist and composer Vinny Golia. On this album he plays a wide range of instruments including flute, alto flute, piccolo flute, baritone saxophone, clarinet and bass clarinet and he is accompanied by John Carter on clarinet, Bobby Bradford on cornet and Glenn Ferris on trombone… the musicians fly in tight formation and then separate to make their own individual statements with the brass punching forward and the flute, clarinet and saxophone swooping and soaring.” -Tim Niland, Music and More, 29 Dec. 2017  Read More

“The performance ends with a requiem for the South African anti-apartheid activist Steven Biko who died in the custody of the government just two years prior. The elegy is both beautiful and haunting.” – Mark Corroto, All About Jazz, 27 Jan. 2018   Read More

“Pan-reedists Vinny Golia and Anthony Braxton have much in common beyond their shared savant-like affinities for wind instruments. Both men bridged encyclopedic appetites for jazz and New music idioms through compositional constructs and notation systems that were distinctly their own.” – Derek Taylor, Dusted Magazine, 4 Jan 2018  Read More 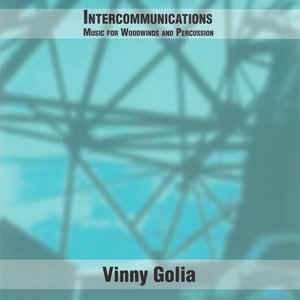 “a timeless call to the spiritual echoing through infinite space and emanating from ancient caves…Golia multi-tracks a wide variety of woodwinds: piccolos and bird calls, bass clarinets and soprano saxophones, various flutes and other wind instruments from multiple cultures, as well singing bowls and gongs.” – KUCI’s Jazz, Not Jazz (2018)

“Unlike Mr. Golia’s more complex music for different ensembles, he deals with a more simple, spiritual sounding, trance-inducing vibe. . . I could see or hear how this music could be used for a PBS special on ancient ruins.” – Bruce Lee Gallanter, DMG (28 April 2017)

“Vinny is the most accomplished multi-instrumentalist that I’ve ever heard. He plays each horn as if it were his “main-axe,” and to see and hear him rip through the gargantuan contrabass saxophone, or rare F mezzo saxophone or conra-alto clarinet or any number of flutes is a mind-boggling experience. Vinny is constantly writing new material and he is always extending the tradition, which is the best way of honoring it.”  -Robert Bush, Jazz 88.3 (Concert preview 2017)

“a night at the Loft that combined the work of living jazz legends in the form of the redoubtable duo of cornet master Bobby Bradford and multi-wind virtuoso Vinny Golia…Whew! That might just have been the most wonderful set of the year.” – Robert Bush, 7 San Diego, 8 Feb. 2016  Read More

“Vinny Golia is a fountainhead of musical history, instrumental technique, compositional styles, and infallible precision. Like Braxton, he has a vast catalog of recordings and understands the scope of the challenge of being a modern musician. On this disk he covers a lot of ideas and moods with panache…” – Farrell Lowe, All About Jazz (Review of Vinny Golia’s Feeding Frenzy)

“Over the years Golia has proven himself to be a crucial artist worth watching. His innovations and explorations showcase the best of improvised music and daring composition.” – Rex Butters, All About Jazz 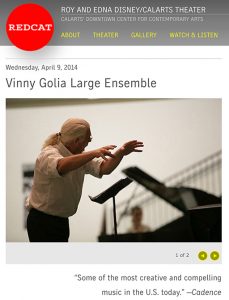 “Some of the most creative and compelling music being done in the U.S. today” – Cadence

“Awesome composing ability, like Mingus and Ellington… he does his best composing for large groups; the intricacy of Golia¹s writing is eye-opening…..amazing music. This is creative music on a grand scale, ranging from Braxtonish neo-bop to meditative chamber music. Golia prefers the term Large Ensemble to big band because it connotes a far wider spectrum of music. And here Golia has the full palette of musical colors he’s been craving all these years, and the players who can realize his complex arrangements.”– Option

“Golia is an unconventional autodidact who works in a grand style, with broad, messy strokes, mixing take-no-prisoners improv with rigorous composition. He takes obvious delight in the range of sounds at his command in the Large Ensemble, from tuba to piccolo-a sort of Mingus meets Stravinsky” – Downbeat

“The range of color and the variance of texture is startling…. The joy of this group is the incredible range of music it surveys. Golia¹s writing encompasses elements from jazz, contemporary classical idioms, world music, blues, marches, you name it. He molds these diverse influences into a coherent, evolutionary flow that surpasses mere pastiche.” – Coda

“this is tremendous music; great vibrating blocks of sound – tremendously sad, as befits the memorial theme – that you could stack right up against the more intense moments of Messiaen or Ives…” – L.A. Weekly

“Few contemporary creative musicians have been so consistently devoted to the challenge of melding compositional scope and improvisational development with the Large Ensembel as Golia. This multi-instrumentalist can generate equally multi-faceted exploration of thematic and textural elements, testing both the combined voices of his 22 piece ensemble and many of its component voices….Golia and his group are filling a very special niche in current exploratory music.” – Jazz News

“What gives unity and coherence to Golia’s music, holding together all the individual voices and free improvisation that exists within it, is its conceptual depth. Conveying a sense of teeming, multi-form life against a ground of silence and ultimate mystery, it reaches beyond melody, harmony and rhythm to make an existentialist statement.” – L.A. Jazz Scene

“At a time when resources make economical small-group free music seem most feasible, Golia sets his sights on colossal compositions….ambitious not only in scale, but in musical aspirations, it consists primarily of long, structured compositional sections laced with accompanied and unaccompanied solos and group improvisation…Golia utilizes the full timbral range, and with this ensemble he has quite a paintbox to draw from.” – Downbeat

“Not only has Golia succeeded in consolidating the talents of many of the L.A.’s areas more venturesome musicians, he has crafted a collection of charts that challenge and titillate their creative sensibilities. Golia’s lengthy suite-like compositions employ a wide spectrum of tonal colors, intriguing combinations of corresponding and contrasting lines and sturdy riff-based passages… this explosively charged package is guaranteed to spark your interest and imagination.” – Record Reviews 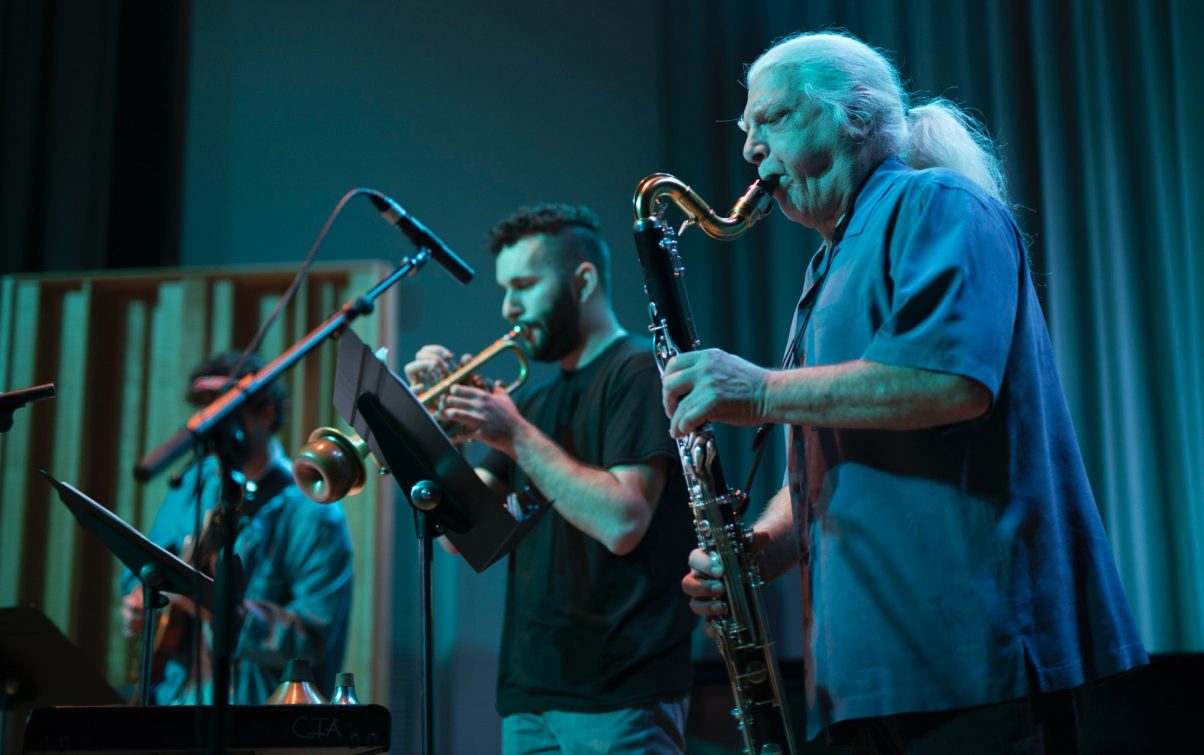 “This music is part of the vast Golia vault of creativity, coupled with respect for past musicians and at the same time pushing the creative envelope. A true inventor and prose composer, his music creates the image of part filmstrip, part word game, coupled with marvelous fantasy. His playing is a tight rope act of episodic improvisation; it all interlocks like a Chinese box. Golia is totally brilliant. The way Golia plays, displaying his supreme style of creativity, is done with artistic clarity of vision, possessed by only artists and madmen. ” – Saxophone Journal

“Golia’s album is free jazz, capably composed and performed – bold and brassy, modern, expansive and searching, yet, quite accessible to discerning listeners. Playing musings that straddle the fence between classical keenings and high-art jazz, Golia’s quintet layers with counterpoint melodies and brief cohesive horn segments, maintaining space within their ripe interpretations. The group has a distinctive sound.” – Jazz Times

“The L.A. reedman’s sparkling performance incorporated everything from bedrock jazz swing to unusual textures that never interrupted the organic flow of the music…the ensemble never simply settled for a static, solos-over-rhythm section approach – the moods and textures within the pieces shifted constantly yet the music never sounded forced” – L.A. Times Calendar

“A Golia performance means exposure to a broad spectrum of feeling, and experience, and to an unpredictable use of musical elements…Golia doesn’t shy away from passionate energy or probing the outer limits of what his instruments can give him, nor does he hesitate to devote the same intensity to more subtle channels of expression. The extent to chich the music of this quintet will seem accessible will depend entirely on the experience and open spirit of listeners, but, even as his boundary-stretching limits Golia has something for even the uninitiated listener.” – Jazz News

“Golia has been one of the most coherent and satisfying proponents of free jazz. His music is actually carefully structured as to theme and mood, with interspersed written parts, ostinato figures, pedal points, and occasionally improvised riffs and backgrounds holding the blowing together.”  – L.A. Jazz Scene

“Golia is a virtuoso on an impressive array of instruments and his visual arts training brings to his music a non-linear, textural approach which, combined with compositional rigor, produces an intense, challenging musical experience.” –  Earshot Jazz Magazine